To protect trade secrets, the TPP requires each signatory nation to enforce “criminal procedures and penalties” against those who gain “unauthorized, willful access to a trade secret held in a computer system”. Trade secrets are broadly defined as “information that has commercial value because it is secret, by any person using a computer system.” There are no provisions for public interest cases involving corporate whistleblowers or investigative journalists.

The TPP agreement will also standardise strict US copyright laws across the other eleven signatory nations. The measures, advocated by Hollywood and the music industry, go beyond current international standards and strongly favour intellectual property rights over freedom of expression rights. 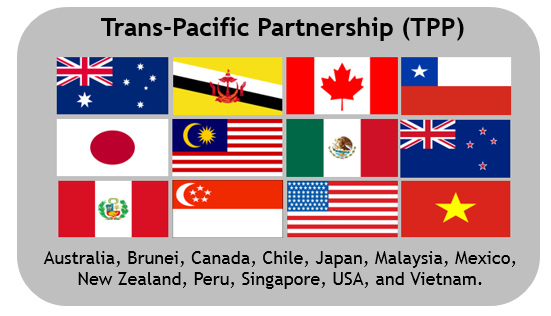 As the Electronic Frontier Foundation summarises, the deal will require signatories to:

Having been negotiated entirely behind closed doors for the past five years, the full text of the TPP deal is expected to be made public after the Canadian elections later this month. Under the recently enacted Fast Track legislation, US Congress cannot amend the terms of a trade agreement.

Europe’s TTIP
TTP’s sister agreement, the Transatlantic Trade and Investment Partnership (TTIP), is currently being negotiated in secret between the US and the EU. TTIP will impact the EU’s 500 million residents in terms of regulations on banking, food and environmental safety, privatisation of public services, and internet services.

It remains unclear what digital and intellectual property issues are under negotiation. The EU’s largest business lobby, Business Europe, assert that “TTIP will not put in question fundamental rights in the EU such as freedom of expression and information”. However, details of the TPP agreement will do little to diminish the fears of digital rights campaigners. Furthermore, the impact on public interest journalism remains a noted concern given the European Commission’s 2013 proposal for new rules to protect trade secrets and the documented increase in the surveillance and harassment of journalists across Europe.

In the absence of public information, WikiLeaks is offering a €100,000 ‘reward’ for a copy of the terms under negotiation.