You are at:Home»Articles»Highlights from The Election Aftermath

FuJo and the Online News Association hosted a vibrant discussion on media coverage of GE16 in DCU last night. For those who missed it, some of the key takeaway points are highlighted below. 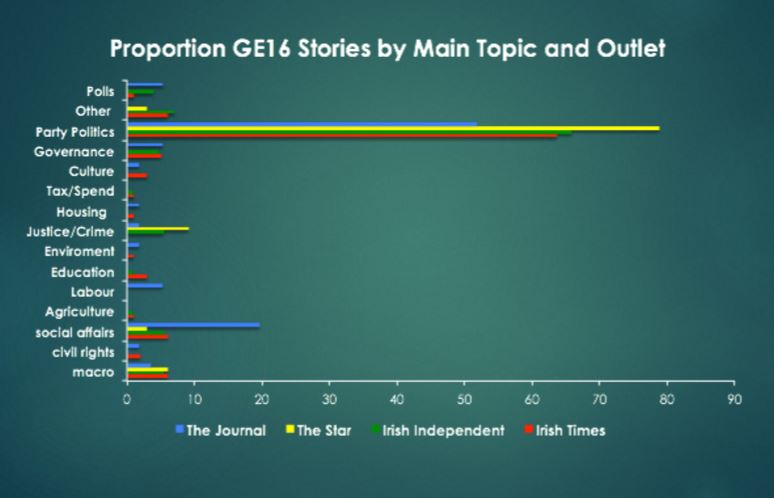 In terms of tone, much of the coverage was neutral with the exception of coverage relating to Sinn Féin. The negative tone here was largely attributed to the Irish Independent. 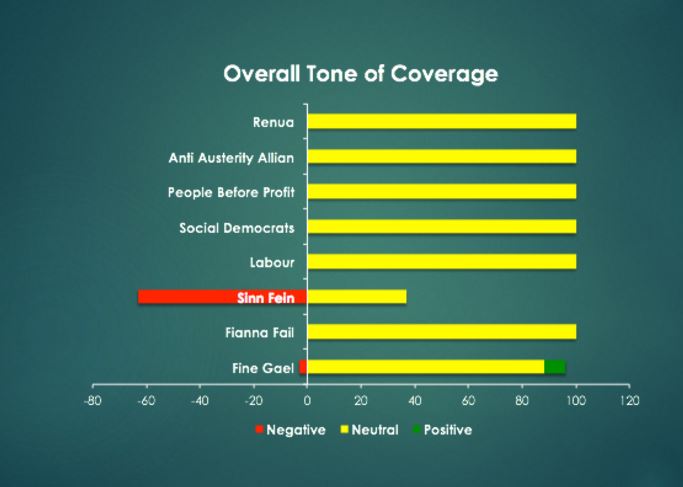 Dr Georgiana Ifrim and Dr Derek Greene highlighted some tools they created to analyse open web data including political Twitter accounts, Dáil speeches and party manifestos. These tools are available on Insight4News. In terms of Twitter activity, they noted that the Social Democrats were on average the most active party throughout the campaign and, interestingy for the next election, the party had the highest increase in its Twitter follower base after the leaders’ debate featuring Stephen Donnelly. However, they also noted that the success of Twitter campaigns depends on target demographic; 50% of Irish Twitter users are aged 15-24 and users are largely urban based. 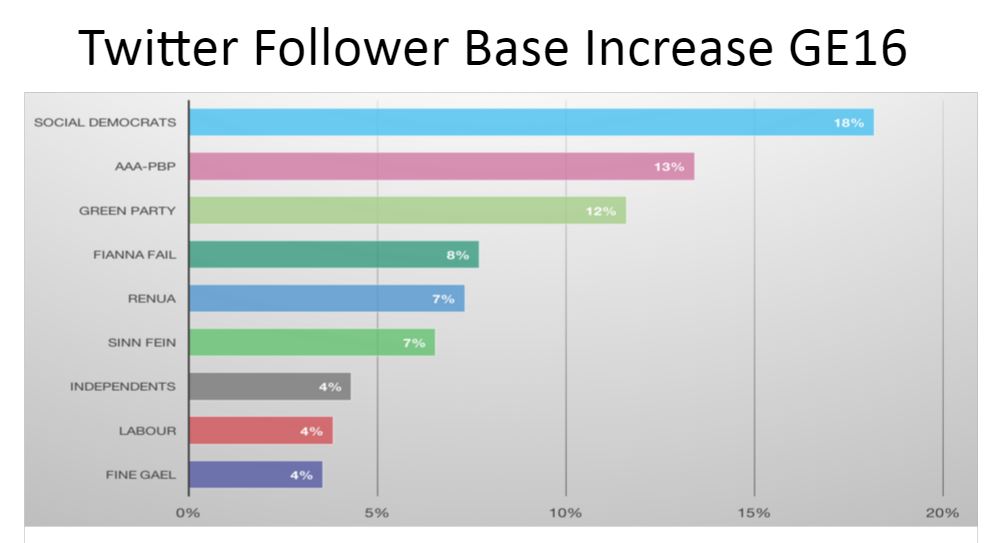 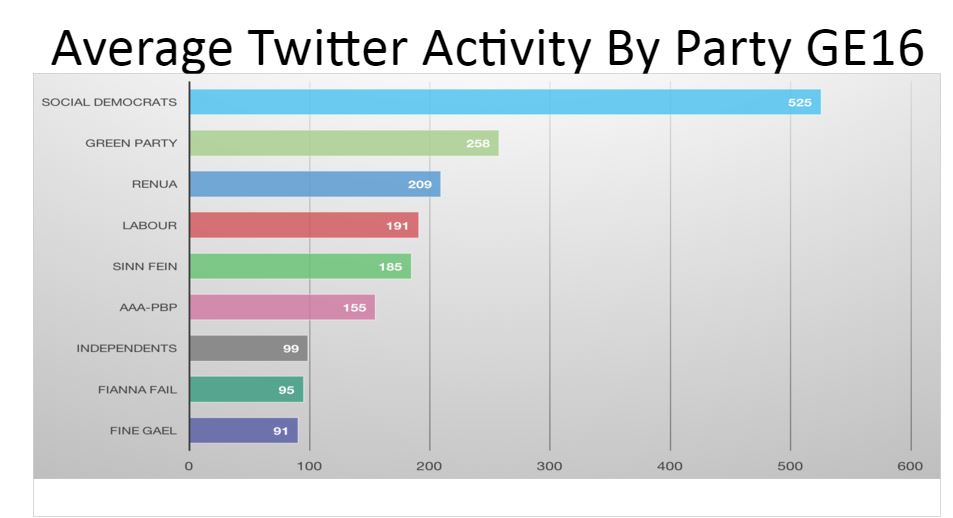 Reflections on the media

Kevin Doyle outlined how Independent News and Media approached the campaign across its titles by “going head to head with broadcasters”. The Count Us In campaign targeted a younger audience by hosting a studio debate with the youngest candidates and inviting user-generated content via YouTube, Facebook and Twitter.

Mary Regan presented a stirring critique of the Irish media’s approach to the election. So much of the coverage, she said, was about the horse race and not the core issues. She further accused journalists who complained that the campaign was “boring” of being self-indulgent and out-of-touch with the reality on the ground.

Mark Little discussed how social media has changed the political process. With over 380,000 #GE16 tweets, he said a “second campaign” or “parallel debate” is happening on Twitter whereby celebrities and civil society organisations used Twitter to highlight issues like mental health and homelessness. 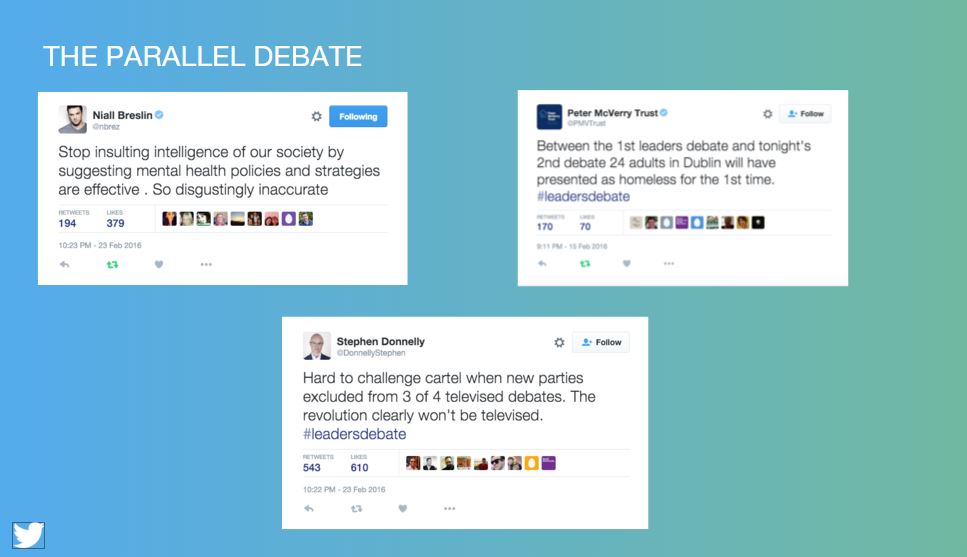 Issues for Future Campaigns and Coverage

For Kevin Doyle, the most obvious point is that the “moratorium is dead and a waste of time” in an era of online video and podcasting. He noted that the Irish Independent put out two podcasts during the broadcast moratorium, which proved popular because people wanted content.

Liam Corcoran used his presentation to offers “lessons in listening to your audience for political parties”. What worked online for parties, in terms of engagement, was content that included videos and graphics. In particular, he stressed, that parties need to be responsive in their online campaigns by answering questions posed by users and by linking to key policy documents.

Questions from the audience raised important issues about the nature of coverage including issues of trust, responsibility, the representation of smaller parties and coverage of global issues like climate change. Unfortunately, there wasn’t enough time to delve deep into each of these topics. Nevertheless, the panel delivered some insightful observations about how digital journalism and Irish journalism could develop.

Mark Little identified a new, and currently underdeveloped, role for journalists in providing context for the conversations that happen on social media. Here, journalists can engage with issues left out of press conferences and political debates. He cited Clay Shirky’s recent observation: “politically acceptable discourse is limited by supply, not demand. The public is hungry for more than politicians are willing to discuss.” By joining in and adding value to online conversations, journalists can respond to this public hunger.

Kevin Doyle pointed out that social media offers great opportunities for Irish media and Irish journalists to pitch their work beyond the confines of what has national appeal. The international audience, he stressed, should not be conceived only in terms of the diaspora.  He highlighted how the New York Times spreads articles of international relevance beyond those who would traditionally have been interested in the New York Times. There was not enough time for Kevin to develop his point further but the takeaway is clear: why should good Irish journalists, especially those working in areas like security, international affairs, and environment, limit their remit to an Irish audience? This also implies that journalists covering subjects that are ‘niche’ to the national readership could be of much greater value to an outlet’s international profile.

FuJo and the ONA hope to collaborate on more events in the future. To find out more subscribe to the FuJo Newsletter and join the ONA Meet-Up group.